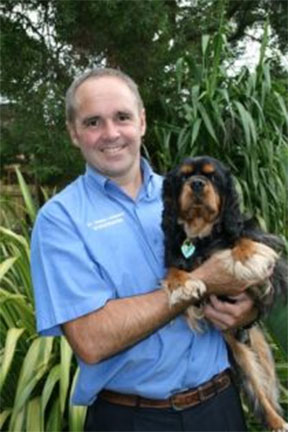 Damian has worked in our practices for over 13 years, and been in ownership since 1997.

He lives locally in Murrumbeena, and is active in the local community. The clinic was even the Gold Sponsor of the recent Totally Wild Carnival at Hughesdale Primary School, which raised nearly $30,000 for computers for the school.

He also has a great interest in the wellness of your pets, preventing illness and injury rather than just trying to fix problems after they have developed. Many of our clients can attest to being able to fine-tune the solutions to their pets’ problems not just by good clinical skills, but listening, and finding out the subtleties of just how you want your individual case to be managed.

He still tries to remain fit and active, playing in his 23rd season for the Melbourne University Hockey Club, and trying to keep up with 8 year old Aidan, and 3 year old Felix.

He is the not-so-proud owner of a grumpy overweight cat named Benny (in tribute to a grumpy ex-ruck for Richmond Footy Club called Benny Gale), and a poorly behaved but lovely Cavalier King Charles Spaniel named Yugi (reference to Manga comic character – your penance for having an 8 year old boy!)