And not in the way you may think!

“Lola” is an extremely cute little Tabby and White moggie belonging to some lovely clients of the East Bentleigh Veterinary Clinic.

“Lola” doesn’t seem to realise that she is a grown-up now (she is 3 years old) and still insists on acting like she is a kitten. One of her recent exploits resulted in her requiring fairly urgent surgery to remove an obstruction to her intestines. She had been playing with some of the kids’ nerf gun bullets – these bullets are fired from an air-pressure gun and are great fun for kids, and kittens. They are basically just polystyrene foam which is great fun to chew. They have, however, a small round rubber end on them to provide the whistling sound effects as they fly through the air – it was this that had become lodged in her intestines.

The food couldn’t get past, so the intestines were full of fluid and air, and Lola was vomiting for 48 hours. The rubber couldn’t be seen on the x-rays on the first day, but on the second day we spotted the little bugger, with the characteristic ballooning of the intestines in front of the obstruction. We went straight to surgery, and with a careful and clean intestinal enterotomy the Foreign Body was removed. Lola recovered really well from her ordeal.

Amazingly in the last 12 months Lola is the second cat who has required surgery at the East Bentleigh Veterinary Clinic to remove a nerf gun bullet, so this is one of those toys which can only be played with by human kids, not feline ones! 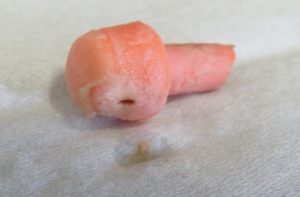