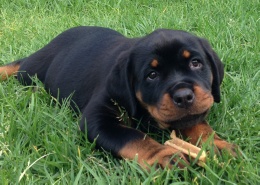 Over the last five months we have had the pleasure of regular visits from Ruby, a delightful Rottweiler belonging to the Quinn Family. Back in February Ruby came to see us because she was just mildly, and vaguely, unwell. It took a very careful examination to find the subtle symptoms that made us suspicious of something more serious than just a pet with a bit of a cold. She had a fever, and appeared a bit swollen under her jaw. Her “glands were up”, but not just the ones in her neck – all her lymph nodes (“glands”) were enlarged throughout her body. A Fine-Needle-Aspirate test of these nodes showed abnormal lymphocytes, and after more investigation we found that she had a “B-Cell Lymphoma”. (The most common similar diagnosis in people is “Hodgkin’s Lymphoma”). To have any chance of survival we had to start immediate chemotherapy. 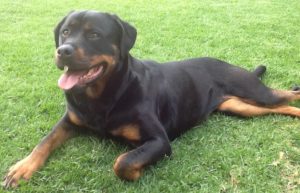 A Veterinary Oncology Specialist tailored a chemotherapy protocol specific to Ruby’s cancer and condition, and 4 months of chemotherapy was commenced.  Some weeks were just blood tests, and other weeks she a deep sedation, and an hour of a vet sitting with her while the medications were given to destroy the cancer cells. 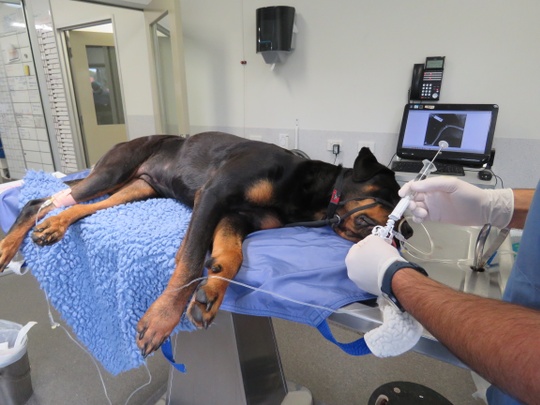 Ruby never stopped wagging her tail every time she came to the clinic for her chemotherapy.  Apart from being tired some nights after the sedation she has had no side-effects from the treatment, apart from the fantastic side-effect of currently being free of cancer.

We will be continuing to monitor her progress over the coming months.

Ruby, and her family, have been a delight to deal with, and we hope that other families confronted with the same scary diagnosis can take heart in the way she coped with her treatment.