I am glad you asked as it isn’t a question that ( fortunately) needs to be asked very often.

If you would like to know and understand this animal emergency better then please read the following post. There is a link at the end where we are now recommending donations be made. News and photos and updates are posted on this everyday hero account.

ok here it is now:

Don’t forget, you can give more then once! ( We have)

Please SHARE this post if you find it useful. We find that people want to help but are unsure how…. This is how.

The Himalayan country of Nepal is very difficult terrain. While the city of Kathmandu has a large urban population most of the country is rural, poor and remote.

Therefore different problems present the Vets attending this disaster. Saving livestock of a subsistence farmer is effectively saving that families ability to survive. Vaccinating street dogs against rabies will stop a Rabies outbreak. 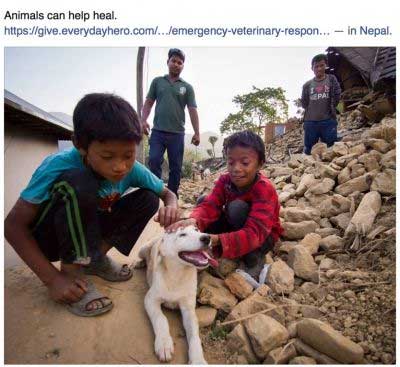 DR THINLEY:
Is from the Sikkim Anti-Rabies and Animal Health (SARAH) team who is heading to NEPAL with Dr Shams and 2 of their most experienced paravets. He says: ( Here he relates to his experience dealing with the consequences of the Sikkim earthquake of 2011) ( East Bentleigh Vet Clinic staff Dr Farlie and Nurse Nicole will be remaining in Sikkim to assist maintain the normal function of the SARAH hospital in Dr Thinley and Dr Shams absence)

“The main problem we found in animals was injury, displacement, starvation. Majority of the animals we found were traumatized, homeless and some were orphaned. People take care of people and the poor animals are left to fend for themselves especially during the disaster. We have found some interesting but distressing facts about animal behavior and their psychology post-earthquake. Most of the pet cats were displaced and separated from their owners. Even when an owner tries to catch their cat and cajole it to safety, the cat is too scared and tries to escape. We found pet dogs refusing to leave their damaged homes which their owners have had to abandon. The farm animals including pigs, goat, cattle were all under stress: the dams have stopped giving milk to their young ones, the bulls trying to escape and goat continuously bleating. Therefore, it’s very necessary to provide food, shelter, first aid and most importantly try and unite the animals (pets) with their owners.

Furthermore, if the animals go hungry then it might lead to other serious negative fallout like dog aggression, dog bite, dog fight, disease outbreak, human and wildlife conflict. When the dogs are starved they may not be able to guard against wildlife intruders like jackal, bear coming into human habitation as the wildlife habitat and food source has also been completely disturbed. Displaced and starved pet cats may not effectively prey on rats, snakes and other vermin as their habitat too is disturbed. Rats and other vermin pose a potential danger to human life including disease transmission of plague and other disease. The stray dogs also prevent roaming dogs from intruding into new habitat. Territorial aggression will usually increase in the area as these new dogs seek to establish their hierarchy which further leads to dog bite and other menace.

During the last Sikkim earthquake, the team made sure that all the animals received proper veterinary aid and commenced a rehabilitation process. The team also treated many other livestock including cows, and goats which are so vital for the marginal and poor farmers. The livestock are the farmer’s source of livelihood and sustenance and an immense help during this disaster in terms of source of food and nutrition.

It is important to make people and administration aware on importance of having healthy stray dogs and cats and other animals during and post disaster period. As most of the wildlife habitats are destroyed and there is a scarcity of food in the forest, wildlife might intrude into human habitation. The well fed stray dogs would guard our habitation against wildlife intruders like jackal, bear where there will be issues of man-animal conflict and disease transmission particularly Rabies.

Any natural disaster such as earthquake is bound to cause widespread wildlife and dog habitat disruption. We can expect many instances over the coming weeks and months of wildlife entering inhabited areas (which they would normally avoid) seeking food and shelter. Dogs will act as guards against wildlife intruders but may be bitten by rabid jackals and foxes. Furthermore, any event that causes instability in the dog population will encourage an increase in the transmission of rabies, for there will be increased dog fights and dog bite incidents as dogs struggle to re-establish their territories and habitat. We must be patient and careful during this adjustment period” 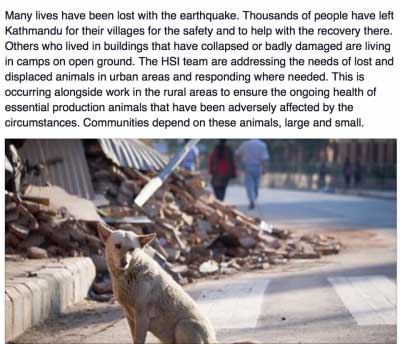 Dr JOHN SKUJA
Has arrived in Kathmandu . He is an outstandingly resourceful and dedicated Vet from Darwin who has worked throughout India with Vets Beyond Borders and in Australia with AMRICC . He is working for HSI Animal Rescue Team which is joining forces with local Nepali ( private and government) Vets and other Vets from around the globe .

“I am working with the HSI Animal Rescue Team in Nepal right now delivering much needed veterinary care to animals and communities affected by the disaster. We are currently focussing on getting vaccinations and preventative health treatments to animals in affected rural areas to help prevent any secondary disease outbreaks that will further cripple the rural communities. Due to the loss of housing and the stress of changed circumstances we are coming across and treating many animals succumbing to respiratory diseases and diarrhoea.”