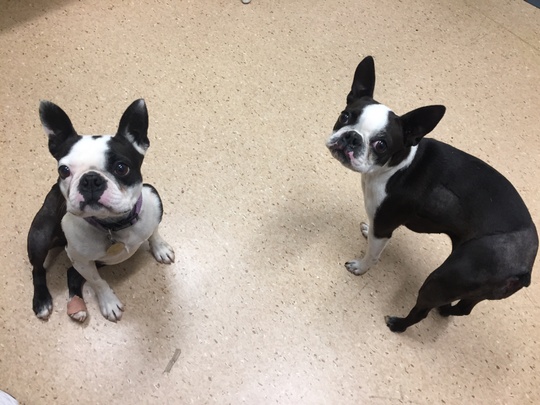 These two little Boston Terriers from the same family had surgery last week after months of lameness, hobbling, holding their legs up when running and an increasing thickening around the stifle (knee) area. Both dogs were diagnosed with Luxating Patellas, (on both knees!), which required surgery to correct. 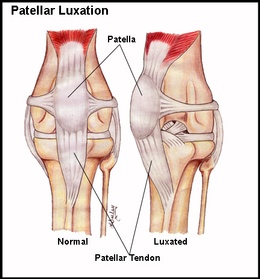 What is a luxating patella?

The patella, commonly referred to as the knee cap, is usually located in the centre of the knee joint. The thigh muscles attach to the top of the shin, via the patella tendon, and when these muscles contract your lower leg lifts.  The knee cap is there to take the effect of this repeated friction and slides up and down the patella groove.  Without the knee cap the patella tendon would eventually wear through and break.

Sometimes, most commonly in smaller breed dogs, the patella ligament is attached to the tibia too far inward which causes the patella to luxate (“dislocate”) out of the the groove it sits in.  Months of luxating in and out wears down the inner ridge of the groove and the patella will slide out even more easily, and the repeated trauma to the cartilage causes arthritis and changes which will be there for ever.  This becomes increasingly more painful over time. 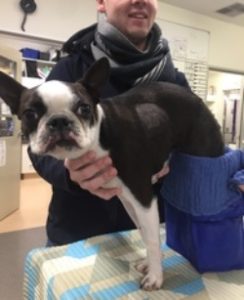 Boots and Soxy both required surgery to remove this poorly placed attachment and re-attach it with the correct alignment.  Some of the grooves needed to be deepened as well, to provide a better pathway for the patella to slide painlessly up and down.  The surgery went very well.

The girls have been boarding with us post surgery for regular icing, physio and of course plenty of cuddles and attention.

They’ve been spending their days free to roam around the clinic socialising and using their new legs but instead they choose to lie in front of the office heater! But who could blame them! 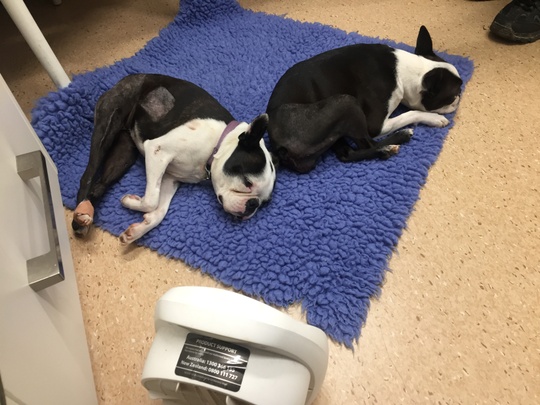