BIG-HEARTED teenagers Nate and Molly threw a birthday bash with a difference. 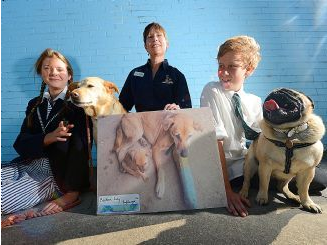 The animal lovers used their 14th birthdays to raise money for charity Vets Beyond Borders – asking for donations in lieu of presents.

They raised $750 from generous mates and family.

“They used Facebook to not just explain the donation in lieu of presents but to give everyone information about Vets Beyond Borders,” Nate’s proud mum Joh Oakley said.

“They uploaded information and videos and everyone got to know what they were fundraising for.”

Vets Beyond Borders is an organisation of volunteer vets who run animal welfare programs in developing Asia-Pacific communities.

Nate hoped the donations-instead-of-presents idea would catch on.

“All our mates were happy to donate and I think some of them will do it in the future,” he said.

“Most of us are fortunate to have what we need, so it’s good to give to a charity instead.” Nate said.

Molly said it “felt like the right thing to do”.

“We didn’t need presents and the animals needed some help,” she said.

The teenagers gave the $750 to Black Rock vet Michael Heath, who is a volunteer with Vets Beyond Borders.

Article written by Donna Carton, from the Moorabbin Leader on the 20th of May 2012

Article written by Donna Carton, from the Moorabbin Leader on the 20th of May 2012